I just had one of those “programming made me happy” moments I thought I’d share.

I’m working on a pure-Elixir markdown parser called earmark. As you probably know, markdown is very poorly specified, which means that each implementation wings it when it comes to edge cases.

Into this void comes Standard Markdown, a valiant attempt to create a specification for this most organic of syntaxes.

As part of their effort, they have a test suite. It’s written as a pseudo-markdown document. The tests are stanzas that look like this:

The lines containing just dots delimit the tests. The first block is the markdown input, and the second block is the expected HTML output.

They thoughtfully provide a Perl script that runs these tests against your markdown implementation.

I wanted instead to integrate their tests into my overall test suite. This means I wanted to run their tests inside Elixir’s ExUnit.

It turns out to be fairly easy. But, along the way, I learned a little, and I smiled a lot. Here’s a brain dump of what was involved.

What I wanted to do

I wanted to take the stanzas from the spec and create a new ExUnit test for each. The name of the test would be the original markdown, so I could easily identify failures.

Top level—Checking for the spec file

I only want to create the ExUnit tests if the spec file is available. To do this, I use the fact that module definitions are executable code. My overall structure looks like this:

The nested module Spec is there because I’m going to need the spec file name in a couple of places later, and I didn’t want to duplicate it.

The main flow here is fairly straightfoward—if the spec file exists, we register ourselves as a test module by calling use ExUnit.Case and then we create the tests. If not, we write a friendly message to the console to tell people what to do.

My next problem was to generate the tests—one test for each stanza in the spec file. I assumed that I’d be able to write code to parse the specs, returning a list of maps, one map per test. Each map would have two keys—md for the markdown and html for the HTML. Given this, generating the tests looks like this:

The loop calls StmdTest.Reader.tests (which I haven’t written yet) to return a list of tests. Each entry in the list is a map containing the markdown and the HTML. The loop uses pattern matching to extract the fields.

The second and third lines of the loop are a little tricky.

First, the parser returns both the markdown and HTML as a list of strings, and each list is reversed. That’s why we call reverse and join on each.

The interesting thing is why we assign the result to module attributes, @md and @html.

The reason is that test creates a new scope. I needed to be able to inject both the markdown and the HTML into that scope, but couldn’t use regular variables to do it. However, module attributes have an interesting property—the value that is used when you reference them is the value last assigned to them at the point of reference. Each time around the loop, @md anf @html get new values, and those values are used when generating the test.

You might complain that this means Elixir has mutable variables, and you’d be right. However, they’re only changable at compile time, which I believe is allowed under standard Mornington Crescent rules.

Finally, the name of the test is simplly the original markdown with a little decorative line before and after it. This makes our test failures look something like this: 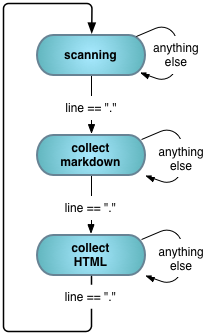 The state machine is trivial.

We start scanning the file. When we find a line containing a single dot, we collect markdown. When we then find a dot, we switch to collecting HTML. When we find one more dot, we’re back to scanning for the next test.

How do we write a state machine in Elixir? We don’t, because Elixir already comes with the function Enum.reduce. We pass it the list of lines to process and an accumulator. The accumulator is a tuple containing the current state and the result. All the state transitions are then handled by pattern matching. Each pattern matching function returns a new accumulator—the (potentially updated) state and result.

There are a couple of things I really like in this code.

First, see how we build the new entry in the result list as we need it. When we first find a dot in the input, we switch to collecting markdown, so we add a new map to the result list. That map is initialized with one key/value pair: md: []. As we collect lines in the :collecting_markdown state, we add them to the head of that list.

Similarly, when we detect a dot when collecting markdown, we add an html: [] entry to our result, and move over to start filling it.

The second cool thing is something that makes me love languages such as Ruby and Elixir.

We normally use case as a control structure:

But case is really just another function. It takes two parameters: the value to test against and the keyword list containing the do…end block. So it seems like I should be able to use case in a pipeline—it would receive the pipeline value as its first parameter.

In this case, I want to do two things. When my state machine finishes parsing the file, it should be in the :scanning state. If it isn’t, then something went wrong with the parse. Second, the call to Enum.reduce returns the tuple { state, test_list }, and I really just want the list part. I can do both of these by appending case to my pipeline:

If the tuple returned by the reduce call doesn’t have a state of :scanning, I’ll get a runtime error (and the error message will show me what the invalid state was). And, assuming the state is correct, the body of the case will extract the second element of the tuple and return it.

Is this fantastic code? Of course not. It’s a quick hack to get something I needed working.

But it is enjoyable code. The combination of cool techniques made me smile, and the unexpected use of case in a pipeline made me really happy.

And that’s why I still code.

(The full source listing is on github.)