Reactive systems have no top

Back when I used to consult into projects in trouble, there was a trick that always worked, Look for classes or modules named XxxManager. These puppies would always be at the epicenter of the structural spaghetti. Invariably they’d be doing too much, with lots of conditional code and a fair amount of poking into the business of the things they were supposed to be managing.

So we’d pick them apart, split out functionality, and see if there was a way to either eliminate them, or turn them into something less coupled (my favorite approach when appropriate would be to turn each into a state machine).

But, as they say, the cobbler’s children have no shoes. I fell into the trap myself this week.

Over the Christmas break, I’ve been amusing myself by writing a terminal emulator in Coffeescript. Part of the intent is to allow me to record and then play back interactive sessions. The playback will have a bunch of bells and whistles (including fast forward, rewind, step-by-step and so on). 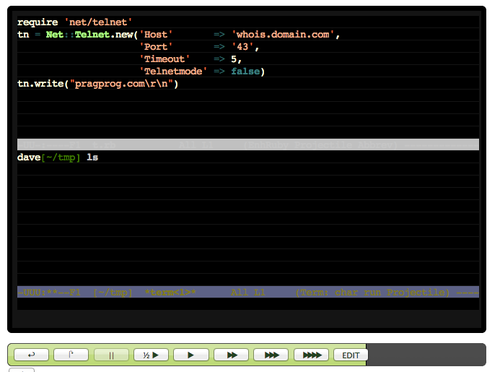 To manage all this (yes, there’s that word) I wrote a class called Driver.

Perhaps it was the eggnog, but the usual alarm bells were muted. I happily coded away for half a day, hacking more and more stuff into the driver. We had events, callbacks, a little RxJS, and lots of asking other objects for status.

And it bogged down. Every change got more difficult. Every test harder to write. And it wasn’t fun.

So I took the dog for a walk, and the dog told me I was being stupid. I’d written a manager class. It wasn’t called PlaybackManager—that would have been a giveaway. I’d called it Driver. That kind of pathetically meaningless name should also have been a giveaway, but until the dog pointed it out, I’d kinda spaced it out.

I got back, gave the dog a treat, rolled back the code to the start of day, and looked for a good name for a class that would drive the playback. I ended up with VcrControls. What did it control? A class called Player. The Player class had methods such as play(), rewind(), and step(). The VcrControls object sat between the UI and the player. And the code just fell into place.

Reactive systems have no top—they are lots of components that transform data and events. There’s no place for anything called a manager in such a system. And careful naming (cf Driver…) is a quick way of working out when you break the rule.