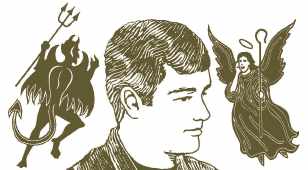 SYWTWAB 4: Readers on Your Shoulders

This is the fourth of a series of personal notes to people who may be thinking of writing (or who have embarked upon writing) a book. You’ll be able to find them all (eventually) by selecting the tag Writing A Book.

Every book has (or at least should have) a voice—a way it speaks to the reader. The voice can be formal, or casual, friendly or aloof, helpful or condescending. One of the main problems facing new authors is finding that voice, and then maintaining it consistently throughout the book. Creating a book’s voice is the subject of this article and the next. In this one we’ll look at how you make sure your book’s content is appropriate for your intended readers. In the next, we’ll look at some tricks for helping a book talk eloquently.

How do you make sure that the stuff you’re writing is right for your readers? Well, think about it in terms of programming. When we write code, we also write tests to validate that the code works. When we write a paragraph, wouldn’t it be nice if we could test it with readers?

Well, most books from good publishers are tested on typical readers before being printed. The process is called reviewing; a manuscript is sent to a panel of both experts and novices for comment.

But that’s a bit like writing all your code before compiling and testing it. If there are problems (and there will be) they’ll be hard to untangle, and the rework will be expensive.

Obviously it’s better to get feedback as you go along. Our beta book process involves a book’s readers as the book is being written. The feedback it generates is amazing (if a bit overwhelming at times). But even this is not ideal—you’re unlikely to release new material more often than once per chapter. The feedback is more timely, but it isn’t real time.

Wouldn’t it be nice if you could have readers with you as you are writing?

With a bit of imagination you can. This is a trick I pass on to all our authors. Most think I’m crazy, but after trying it most report it works well for them.

Do you remember having imaginary friends when you were a child? Well, it’s time to go find them. In fact, it’s time to find three of them.

When writing a book, I suggest you imagine you have three different people looking over your shoulder as you write. Each represents a different typical reader of the book you’re writing:

One imaginary friend is the novice reader. This is the person who knows next to nothing about your subject matter.

The second imaginary friend is a subject matter expert. She’s someone who knows as much as you do—if not more—about your book’s content.

Your third imaginary friend is the picky, average reader. They aren’t a novice, but they don’t really know too much either. What distinguishes them, however, is that they’re that special kind of geek whose pleasure in life comes from finding holes and inconsistencies. (These people are the reason that Texas has a “he needed shooting” defense).

When it comes to inventing these intangible critics, I have one more recommendation. Pick people you know (or that you know about) to act as these friends. Of course, these people won’t really be with you as you type, but knowing who they are makes it easier to imagine their reactions to your creative output. In fact, get pictures of these three people and tape them to your screen so there’s no escape.

Now you’ve invented your own private peanut gallery, it’s time to put them to work.

As you’re typing your book, get into the following habit. Stop at the end of every paragraph and poll your imaginary friends. Ask each in turn a couple of questions: “did that make sense?” and “what questions or comments do you have?”. When you’re starting out, do this for real—ask out loud. I know—it sounds really stupid. But there’s something about vocalizing things that engages a different part of your brain. You’ll find that your three friends actually start to have their own personalities, and they’ll say things to you that you weren’t expecting.

Your novice friend will stop you from rushing through your explanations—you’ll pace things so that they can keep up, and you make sure you concentrate on the essentials and avoid confusing details.

Your expert friend will make sure you stay technically accurate. She’ll also serve a subtle role: when you write a book to be read by a range of readers, it can be a challenge to keep the more advanced ones engaged. But if you imagine an expert reading along as you’re writing, you’ll find it easier to inject little in-jokes and asides that will pass the novice by but that will make the expert feel good about continuing to read.

Finally, the picky friend makes you view what you’ve written critically: he acts as your conscience, keeping you from cheating yourself and your readers as you write.

When you first start out, you have to force yourself to do this. It feels very strange. But by the end of your second chapter, you’ll find that the process has become automatic. You’ll find yourself correcting and improving your writing in real time, as you type.

OK, so this sounds crazy. Surely no one really has these imaginary conversations while they’re writing? Well, I do. And I know other good writers who do. It’s simply a technique for helping you act as your own reviewer—it injects a kind of faux objectivity into what is otherwise a very lonely and subjective process.

And, here’s an interesting twist. Many agile methodologies recommend pair programming as a way of getting two pairs of eyes on each chunk of code as it is written. If you can’t rustle up a person to pair with you, bring your new imaginary friends to your next coding session.