I spent this afternoon reorganizing (ok, just organizing) my files. In the process, I came across some of the notes I made in Snowbird back in 2001.

That was when 17 mawgs1 who cared about projects and software got together to discuss what were then called Lightweight Methodologies. XP had just taken off, and SCRUM was making waves, and we all wanted to see if there was enough common ground for us to isolate some underlying principles. In the end, I think we did something far more important—we isolated a set of four common values, and wrote them up as the  Agile Manifesto..

As the conversation began to gel, I wrote down a short bullet list of things we were saying:

Soon after, we broke for lunch. Martin Fowler and I were standing at the whiteboard, trying to see if we could come up with a summary which captured the mood of the room. I noticed that as we were talking we often seemed to focus on what we didn’t like as much as on the values we believed in, so we experimented with writing down our conversation that way: we prefer X over Y. Gradually folks drifted over from the lunch table and the conversation flowed. (The picture that Ward took that forms the background on the Agile Manifesto site shows the group clustered around the board). I think we sat down after lunch with five bullets on the board. By the end of the afternoon, it was down to four, plus an introduction. I copied the whiteboard into my notes too: 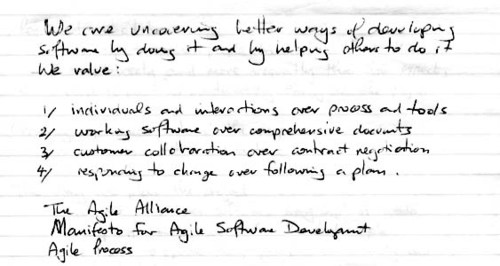 You can argue the implementation (I see some teams that use the word “agile” when they really mean “chaotic”) , but the values still ring true to me today. I think the Agile Manifesto has helped teams around the world rethink their priorities, and in the process has helped re-humanize software development.

And that’s as it should be.